They provide a context for what you are doing, and where you are going in the UI. They can act as a "tease" for what will happen if you the user taps one, but providing a moving kaleidoscopic view of what lies underneath.

They can animate with notification information as well. As Microsoft puts it in the Metro documentation, motion brings Metro to life. It feels good, adds dimension and depth, and is as important to the overall user experience as is the actual design of the UI. And it's a preview, of sorts, to the sorts of motion we're going to see as all of our interactive systems move to a 3D and natural interfaces future. Yet another area where Windows Phone breaks with the UI metaphors of the past and present, really is that it puts content front and center.

When you think about it, this makes a lot of sense in the context of the UI itself being deemphasized and simplified. That UI is simple, yes, but it's also stark and plain looking, even a bit forbidding.


The UI isn't front and center, and neither is anything else. When everything gets out of the way, you're just left with nothing. 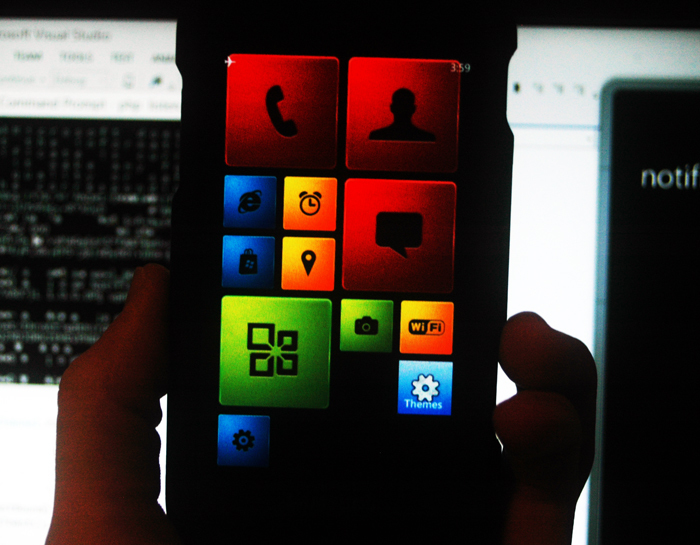 In Windows Phone, by contrast, Microsoft understands that a phone is a personal, intimate device, or a "companion to life," as Shum put it. With such a device, people want to do certain things, so the thinking is, let's let that content be the interface. So you don't have to think about which application to launch when you want to access a favorite photo. You tap on a photo instead, or access an experience called Pictures that combines functionality from a number of applications and online services that, go figure, are contain your own photos and photos of your friends and family too.

In this kind of UI paradigm, all of the user interface "chrome"--the surround window frame, borders, and so on--is stripped away and the content, in effect, becomes the UI. This paradigm is the key, too, to Microsoft's rich and immersive panoramic experiences, like the Pictures hub. The content is the UI, again, and you interact directly with that content. The device works the way you think, instead of forcing you to think--as the iPhone does--about the way the device organizes things. Somewhat controversially, Microsoft is basing the Metro UI heavily on the use of typography.

This again is something we don't see in any competing phone systems, let alone consumer electronics products or PCs of any kind. Type can also be expressive, as Shum noted, and anyone who is familiar with the Zune HD today has an early experience with how the use of textual menus can be made to be both beautiful and usable. Of all the Metro principles, this is the one that immediately set off a negative reaction in my head.

It's hard to explain why, exactly. But I think it's because this phrase is like saying that you're cool, or that you're having a good time at a party. In both of these cases, you either are or you aren't, and if you have to say you are, you're not.

But actually, when you come to understand what Microsoft is trying to communicate here, it makes sense. There's just gotta be a better way to say it. I would state this as, "It's a phone, not a PC. It's not an attempt to re-do the PC interfaces of the past on a smaller screen.

How to Get New Themes for WINDOWS PHONE.

How to use LetGo to sell or buy used stuff Read more. How payment apps make money without charging any fees Read more.

Read more stories. Apex Launcher Use a different Android launcher. GO Launcher Z A launcher with a lot of included downloads. Google Now Launcher A smarter way to use your phone or tablet.